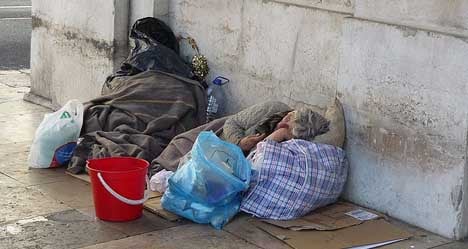 Some three million Spaniards were living in extreme poverty — or on €307 a month — in 2012, says Spanish charity Cáritas. Photo: xornalcerto/Flickr

The richest 20 percent of people in Spain now has seven and a half times more wealth than the poorest 20 percent, according to the study into poverty in Spain by the Catholic charity Cáritas.

This was the widest gap in Europe and 30 percent worse than before the crisis, said the charity.

These findings demonstrate "a situation of neglect, injustice and the dispossession of people's most basic rights", said Cáritas General Secretary Sebastián Mora at a press conference to mark the release of the report.

The most vulnerable members of Spanish society were also the hardest hit, Mora said.

This was because the crisis had "led to weaker family ties and other safety nets, especially in the public sector".

The report reveals that around three million Spaniards were living in extreme poverty — or on €307 a month — in 2012. That's twice the levels seen in 2008, or before Spain's recession hit.

Cáritas also noted how the recession had hit purchasing power: the country's average 2012 salary of €18,500 was lower in real terms that that of 2001, said the charity.

Average salaries, meanwhile, had fallen 4 percent since 2007 while prices had jumped 10 percent in the same period.

The charity also reported that the number of homes where all household members were unemployed had climbed from 380,000 before the crisis to 1,800,000 at the end of 2012.

The Cáritas report comes only days after Nils Muižnieks, the Council of Europe Commissioner for Human Rights, slammed child poverty levels in Spain.

"Growing child poverty, malnutrition and inadequate housing are issues of serious concern because of their potentially devastating long-term impact on children and the country," said Muižnieks during the release of a study which shows that child poverty in Spain hit 30 percent in 2011.

Unemployment in Spain is currently running at 26.2 percent according to Eurostat.