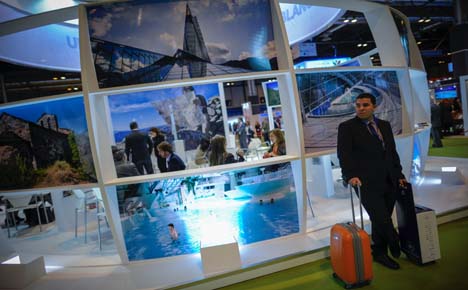 But while visitors shunned Madrid, international arrivals in Spain overall were up 4.5 percent for January through August as political unrest in other sunshine destinations popular with northern Europeans such as Egypt and Turkey boosted business at its beach resorts.

"Madrid has not failed because suddenly it stopped being attractive, it has failed because people have a hard time coming due to a lack of connectivity and there is little promotion. We have not spent the amount that we need to," said the president of the Madrid Confederation of Commerce, Hilario Alfaro.

Located in the heart of Spain, far from the architectural gems of Barcelona and the white-walled villages of Andalusia, Madrid boasts several top museums such as the Prado but has failed to develop a strong tourism brand.

"The fundamental problem is that Madrid as a destination lacks an international image like Barcelona has," said the secretary general of the Madrid Association of Hoteliers, Antonio Gil, before adding that spending by the city on tourism advertising campaigns is "clearly insufficient".

The decision by Europe's two largest budget airlines, EasyJet and Ryanair, to drastically reduce their flights to Madrid this year after Spanish airport authority AENA doubled airport taxes at the city's airport, has compounded the problem.

Ryanair cut its capacity to Madrid by 35 percent while EasyJet stopped basing crew and aircraft in the Spanish capital and reduced seat-capacity to the city by 20 percent.

Spain's loss-making flag carrier Iberia has also cancelled dozens of routes as part of a major restructuring following its merger with British Airways.

Madrid airport suffered the biggest slump in passenger numbers among Europe's major hubs in August with a 11.7 percent drop to 3.8 million and was surpassed by Barcelona airport as Spain's busiest airport for the first time that month, according to data from the Airports Council International.

Barcelona is the tenth most popular air travel destination in the world in 2013 in terms of estimated arrival of foreigners, according to MasterCard's annual Global Destination Cities Index which ranks 132 cities. Madrid languishes in 23th place, behind Riyadh, Taipei and Vienna.

Hotels are feeling the pain. The city's occupancy rate in August was just 47.5 percent and in June the four-star Foxa hotel chain, which ran seven hotels in Madrid and the surrounding region, went bankrupt.

Madrid mayor Ana Botella unveiled a "shock plan" last month to reverse the drop in visitor numbers that involves spending three million euros over the next three months to promote the city abroad in key markets like Britain and the United States as well as in new markets like Russia and China.

The city is also working to get a low-cost airline to be based at Madrid airport.

"This is fundamental in the world of tourism that we live in now. We can do a lot of promotion but if there is no means to come, we can't do anything," said Botella.

To improve its image, the Madrid city council last week unveiled a draft plan to stamp out anti-social behaviour which outlines fines for littering, aggressive begging and soliciting prostitutes.

"The danger is to repeat what other cities have done, the challenge is to create something that is authentic, historical and unique," he said.