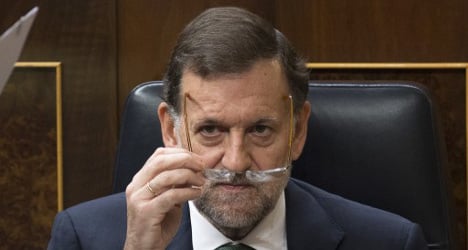 Investigating judge Pablo Ruz said "it was not necessary to hear" Rajoy as requested by the plaintiffs. Photo: Dani Pozo/AFP

High Court investigating judge Pablo Ruz wrote in a ruling that "it was not necessary to hear" Rajoy and several other top Popular Party (PP) officials as requested by the plaintiffs.

"Judge Ruz opposes summoning him to testify, in line with the position of the chief prosecutor's office. Neither him, nor the other leaders," a court spokesman added.

The corruption affair originated in 2009 as a judicial investigation into alleged kickbacks involving members of the PP.

It exploded in January when a newspaper published copies of account ledgers purportedly showing irregular payments from a secret slush fund to top party members, including Rajoy who has led the party since 2004 and took power in 2011.

The allegations come from the party's former treasurer, Luis Barcenas, who has named Rajoy in the scandal.

Rajoy has denied that he or other party figures received illegal payments and has said he will not step down over the affair but admitted when he was grilled in parliament over the affair that he had been wrong to trust Barcenas.

In testimony in July, Barcenas named Rajoy among Popular Party officials who benefited from the party slush fund.

Barcenas was jailed in June pending an investigation into a separate corruption case, in which he is alleged to have held €47 million in secret Swiss bank accounts.