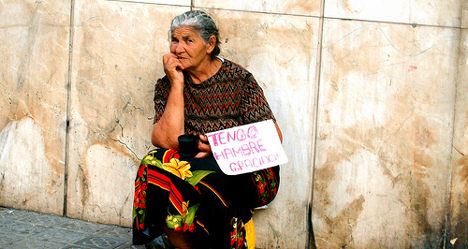 Beggars could be hit with fines of as much as €750 if Madrid's new by-laws are passed. File photo: zoetnet/Flickr

The draft rules would see people slapped with fines of up to €750 ($1,000) for offences such as begging outside of schools, littering, and urinating in the street.

More serious offences like soliciting prostitutes near schools or shopping centres, meanwhile, could see people hit with penalties as high as €3,000.

The idea behind the planned rules, according to Madrid's town hall is to allow "everyone to be able to carry out their activities freely" with "respect and dignity" while allowing for all the different "ways of living".

But some of less obvious rules have led to the Independent to call this the biggest clampdown since Madrid's Policing and Good Government law of 1948.

The more unusual by-laws regulate against skaters on footpaths and offering tarot services on a public thoroughfare.

Placing pot plants in a dangerous position and walking a "bothersome dog" will also be subject to fines if the new laws to go through.

Also on the list are shaking out carpets in the street, and using municipal ponds to sail model boats.

The city's buskers will also have to keep quiet during the city's siesta hours from 3pm to 5pm.

The rules are currently being reviewed by the city's opposition parties a final version will go up for the vote in 2014.