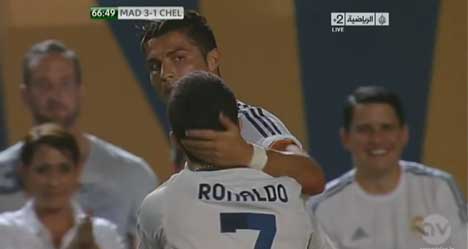 “All I wanted to do was meet him and thank him for helping me during the hardest times of my life. It won’t happen again,” said 20-year-old Ronald Gjoka. Photo: YouTube

20-year-old Ronald Gjoka interrupted the match between Real Madrid and Chelsea on August 7th when he jumped onto the pitch of the Sun Life Stadium in Miami.

The Albanian-born Canadian ran straight up to his idol and proceeded to hug him.

The Portuguese attacker took kindly to the young man’s affectionate gesture and engaged in a brief conversation with him before security removed him from the pitch.

“I’d like to apologize to the Sun Life stadium owners and to Cristiano Ronaldo himself,” Spanish sports daily Marca reported him saying.

“All I wanted to do was meet him and thank him for helping me during the hardest times of my life. It won’t happen again.”

But Gjoka’s apology wasn’t enough to rid him from trespassing charges which could result in him being deported from the US and having his student visa revoked.

Marca reported on Fridat that as soon as Real Madrid's number one player was informed of the 20-year-old troubles, he decided to write the following letter to the Florida attorney in question:

"My name is Cristiano Ronaldo and I play for Real Madrid. I was playing in Sun Life Stadium when a fan entered the field.

"His name is Ronald Gjoka, a young college student. We hugged, and we spoke for a while, until security arrived to escort him off the field. He was not aggressive or violent in ANY way. What's more, he did not put up any resistance when the security guards and police arrived.

"As I understand it, he has admitted his mistake and understands the importance of security. He is a young man of twenty who grew up without a father and was raised by a single mother. He attends Palm Beach State Community College, Florida, with an international student grant.

"I am concerned because I understand he may face problems with immigration and with his college if the criminal charges against him are not dropped. He was immediately taken to the Stadium's security area and then spent a day and a half in jail.

"It seems he appeared before a judge on Monday accompanied by his attorney who asked for the charges to be dropped, but you chose to ignore his appeal.

"I understand your position and the importance of enforcing rules and laws. However, I respectfully request that you and your office reconsider this decision and dismiss the two criminal charges this young man faces.

"I would hate to see him face criminal charges for his mistake. By all accounts he has a bright future ahead of him and I'd hate to see this future ruined by an error of judgement. Thank you. If you have any questions please don't hesitate to contact me directly at any time."