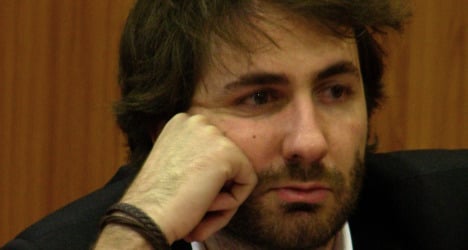 Daniel Correa is the coordinator in Madrid for the pan-European civic platform Citizens For Europe.

Recently The Local spoke to Daniel Correa about an initiative which allowed Spaniards to vote in the German national elections.

Correa works in the Madrid office of Citizens for Europe, a pan-European group that aims to get people more interested and involved in EU politics..

This week we got back in touch with him to talk about his views on the present situation in Spain and the rest of the world.

What international news story has caught your attention this week and why?

Most days I read about things happening around the world that I have trouble understanding how they can take place.

In Greece the leader of an anti-democratic politician has been arrested for inciting murder.

In France the xenophobic Front National leads the way in the European elections.

Syria and Egypt are falling apart.

And on top of all this the Pope seems to be the only one using some common sense with regard to abortion, homosexuality and immigration.

I still think the Lampedusa tragedy (where hundreds of people died when trying to reach Italy by boat) is the biggest story of the week in my eyes. It’s the symbol of Europe’s shame.

And how about on the Spanish front?

In Spain, shame has a name: Ignacio Wert.

Our Education Minister has kept his promise and abolished the Education for Citizenship and Human rights from school syllabuses.

All political parties and the vast majority of Spaniards are against his move.

It’s been misinterpreted as a “socialist” school subject used to indoctrinate students with left-wing values.

But it’s real objective all along was to teach civic values.

It was recommended by the Council of Europe and its Comissioner Nils Muiznieks has called for it to not be scrapped.

How do you think the rest of the world sees Spain?

I’m not sure but I can’t imagine it being positive.

They probably see us as a superpower in sport and a dwarf in everything else.

A country on the verge of bankruptcy that brags about having bars full to the brim on a daily basis.

A country where the mayor of Madrid’s office is bigger than Obama’s.

A country with the best health system in the world where a homeless Polish immigrant dies from starvation in Seville .

All in all, not good.

If you had to tell a foreigner something positive about Spain, what would it be?

I think Spain is a country that shies away from self-pity and doesn't give up.

I get the impression Spaniards still get up and fight despite the hardships they’re going through.

Problems will arise when people who have nothing no longer get up.

If you could change one thing about Spain what would it be?

What are the main challenges you face at Citizens of Europe?

Our organization has as its main objective to work for a strong, well-organized civil society. We’re a non-profit body that looks to have as many members on board as possible without asking for anything in exchange.

Our biggest challenge is reaching out to small and medium organizations. They’re the hardest to locate but also probably the ones that need our help most.

Is there anything about Spain that stops you from reaching your professional goals?

Not directly. There are however situations and events happening in Spain I find worrying.

The ruling party’s discriminatory attitude and how they’re not willing to budge or reach a consensus.

I don’t recall another Spanish government that displayed so little sensitivity.