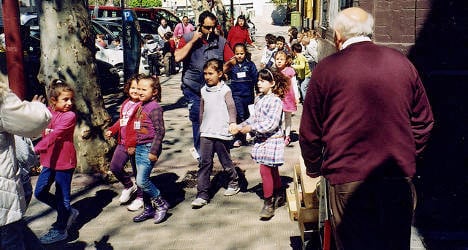 File photo: Óttar Martin Norðfjörð
The report describes accounts of "children fainting at  school due to lack of proper meals" and "wearing the same clothes at school for three consecutive weeks, due to poverty."
"Cuts in social, health and educational budgets have led to a worrying growth of family poverty in Spain," said Nils Muižnieks, the Council of Europe Commissioner for Human Rights on the release of the report.
Based on Muižnieks' five-day fact-finding mission to the Spanish cities of Madrid and Seville in June, the report looks at Spain's human rights record both in terms of children, and more generally.
Child poverty reached 30 percent in 2011, the report says, while also noting cuts to education budgets of 14.4 percent to 21.4 percent in the last three years.
"The growing child poverty, malnutrition and inadequate housing are issues of serious concern because of their potentially devastating long-term impact on children and the country," Muižnieks said on Wednesday.
The Latvian also stressed that the impact of Spain's austerity measures on people with disabilities and mental illnesses.
The Spanish authorities should "adjust policies to ensure that adequate resources are available for their education and employment opportunities", he argued.
The Spanish Government responded to the report by saying education spending as a percentage of GDP had risen from 4.36 percent in 2007, or before the crisis, to 4.55 percent in 2013.
The government also noted subsidies to people with disabilities had risen — from €757,199 in 2010–11 to €977,759 in 2013–14.
On Wednesday Muižnieks also criticized Spain's disproportionate use of force by law enforcement officials to control anti-austerity demonstrations and the imposition of fines on demonstrators.
"I am also concerned about the frequent lack of visible identification numbers of law enforcement officials, especially during demonstrations, as this has impeded the prosecution and sanctioning of perpetrators of abuse," he said.
"The recent changes in the size and display of the identification numbers of national police officers is a step forward. However, the numbers should be worn in a way that facilitates easy identification of the officers," the commissioner added.
The Commissioner said authorities should also fight to stamp out ethnic profiling practices, which target and stigmatize migrants in stop-and-search operations.