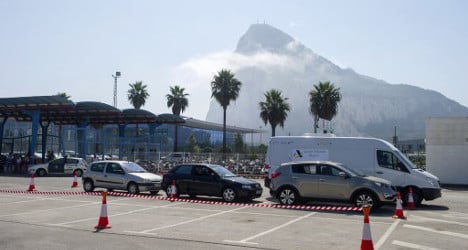 A Spanish customs van equipped with a ‘Mobile X-Ray Scanner’ next to cars at the border between Spain and Gibraltar in September. Photo: Marcos Moreno/AFP

During an address to the United Nations in New York on Wednesday Picardo accused the Spanish government and the media of waging a "campaign of incitement to hatred through lies" against Gibraltar.

"Whole sectors of the Spanish government and media have launched headlong into a concerted and unrelenting campaign of lies designed to demonize the Gibraltarians," he said.

"And in June this year shots have been fired by Spanish Guardia Civil officers at a Gibraltarian using a jet ski for pleasure in our waters," he added.

Britain protested to Spain in June after a 32-year-old man reported that Spanish police fired several shots at him while he was testing his new jet ski with family and friends.

Spain's foreign office confirmed that an incident involving a jet ski did take place but said that no shots were fired.

"Mister Picardo is not subject to the Spanish penal code but Mister Picardo, if he accuses third parties of having carried out an offence, must prove it, and if not, we must denounce him before the appropriate international bodies," Spanish Defence Minister Pedro Morenés told public television TVE.

Spain has been struggling for decades to recover Gibraltar, the rocky promontory on the southern tip of the Iberian peninsula bordering Spain that overseas the gateway into the Mediterranean from the Atlantic. The Crown of Spain ceded it to Britain in 1713.

Tension flared between Madrid and London after Gibraltar boats dumped blocks of concrete in disputed waters used by Spanish fishermen. Gibraltar said it was creating an artificial reef that would foster fish populations.