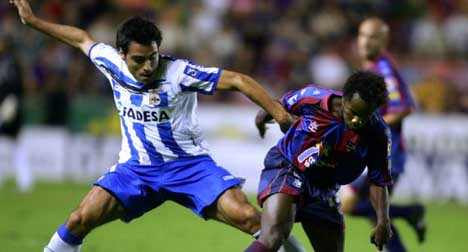 Deportivo de la Coruña and Levante are two of the teams being investigated for match-fixing after one of the players from the Valencian team spoke out about the scandal. Photo:Jose Jordan/AFP

Chris Eaton, the former head of security at FIFA, football's world governing body, is now the director of sport integrity at ICSS and will head up their end of the partnership with the LFP.

In August, the president of the Spanish league said nine matches were currently being investigated on suspicion of possible match-fixing, including three in La Liga — the top division — with the other six in the second tier.

Two of the suspected matches — Girona v Xerez and Hercules v Racing Santander — were already being examined by Spanish courts.

Javier Tebas added "match-fixing is a cancer we must eliminate".

Match-fixing is a crime in Spain and can lead to prison sentences for individuals or a club being banned from official competition.

"Sports integrity is an absolute priority for the Liga Nacional de Futbol Profesional and match fixing has been on my agenda since I became president," Tebas said in Wednesday's joint statement with ICSS.

"My aim is to find adequate solutions to reduce this phenomena and as such, we are dedicated to collaborate and act together with organisations such as the ICSS to enhance the fight against match fixing," he added.

Eaton, speaking at the Leaders in Football conference in London, said: "We admire the LFP's commitment to preserving integrity in sport and to ensuring that match-fixing is stamped out.

"It is important that football continues to be vigilant and develop strong policies that safeguard sport integrity.

"Our teams of experts in this field look forward to working with the LFP to support its ongoing endeavours to promote integrity." 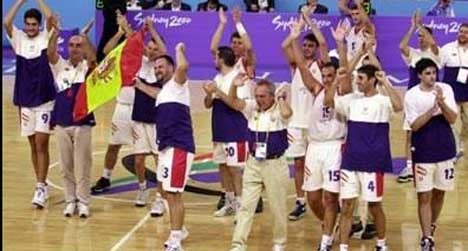 When sports daily Marca published a photo of them celebrating with their gold medal in Sydney, things started going very wrong. Photo: nuestrahistoria.blogspot

There is no doubt that Spain’s image abroad has been tarnished by political and royal scandals in recent years.

Some foreign commentators have come to see Spain as a country where cheating and corruption are as widespread as they are accepted.

But none of the scandals involving Spain’s elite have been as jaw-droppingly outrageous as that of the country’s fake mentally disabled team at the Sydney Paralympics in 2000.

This case, which has finally been brought to trial thirteen years after the event, raises at least three important points.

Why has it taken so long for these fraudsters to be brought to justice? Why has only one person been found guilty? And why has the punishment consisted of only a small fine?

"I couldn't believe it when I was told that the whole Paralympics movement was a farce," wrote Carlos Ribagorda, team member and journalist who uncovered the scandal.

"I had to see it with my own eyes so I took part in the Iberian Cup in Portugal prior to the Sydney Games."

"None of the twelve players who made up our team were mentally disabled."

Ribagorda wrote in Capital, the finance magazine he worked for, that huge sponsorship deals with multinationals like Telefónica and BBVA were at stake.

Guilty consciences were assuaged by Martín Vicente’s assurance that all the other teams would take the same approach and that fake Paralympians were commonplace in each and every one of the sports at the Games.

The final team chosen was made up of two players with IQs below 70 as required; the rest posed as mentally disabled players with the help of fake medical certificates they were provided with.

Half way through the first game of the tournament, the referee called time out with China trailing 30 points behind the Spaniards.

“Lads, move down a gear or they’ll figure out you’re not disabled,” the Spanish trainer told his players in a half-serious half-joking manner, Ribagorda recalls.

But even playing half-heartedly, Spain breezed through to the final where they went on to beat Russia.

That’s when the trouble began.

Spanish sports daily Marca published a story about the victorious team accompanied by a photo of them celebrating on the Sydney court.

Soon readers wrote: "Hey, I know that guy" or "I’ve played against him and he’s not disabled at all", Ribagorda recalls reading in the article’s comments section.

"(When we were due to fly back), they told us to wear hats and sunglasses so that we wouldn't be recognized at the airport.

"We were walked through a special gate alongside Spain’s Secretary of Sport Juan Antonio Gómez Angulo. By that stage there was no hope of a cover-up."

Ribagorda spoke to his editor about what was going to happen before he left for Sydney.

They decided he should act as an undercover journalist during the tournament and keep regular contact with Capital’s editors via email.

"We prepared the headline 'Fraud at the Paralympics' as well as the front cover of the magazine the day after (Ribagorda) told me what was going to happen," Capital’s editor Carlos Salas told online daily La Información.

Ribagorda, along with some of his team mates, returned their gold medals, team kits and spending money to the Paralympics headquarters in Bonn, Germany.

Their acts had brought not only Paralympic basketball into disrepute; the ethics and values of the whole Games were now being questioned.

Ribagorda even went as far as saying that a couple of their Russian opponents in the final were "just too good", thus suggesting Spain weren't the only team using dirty tactics.

It’s taken an unbelievable thirteen years for the cheats who left Spain’s sporting reputation in tatters to be brought to justice.

Fernando Martín Vicente, the mastermind behind the botched money-making scam, took full responsibility for Spain’s biggest sporting scandal since he realized there was no way out.

Father of a disabled child, Martín Vicente founded the National Association of Special Sports in 1975, an organization which has reportedly received huge amounts of state money over the years.

Spanish newspaper El Mundo went as far as saying his role as chairman of various bodies involved in sports and disabilities had earned him a €5 million fortune as well as eight cars, five houses and a yacht.

On Monday he finally stood trial at Madrid’s Provincial Court in a case which the world, as well as most Spaniards, has preferred to forget.

Although the former FEDDI president was found guilty of fraud and forgery, he only had to pay a €5,400 fine and return the almost €150,000 he received from sponsorship deals when Spain won the gold.

The ten basketball players who disgraced their country have been cleared of all charges.

It's a scandal that could force Spain's sporting community to take a long, hard look at itself and question it's values and those of its sportsmen — some of the only people to truly bring any glory to Spain since the crisis began.