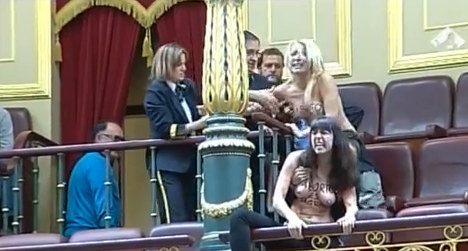 Three protesters from the global feminist group Femen made headlines when they began chanting "Abortion is sacred!" during Wednesday's parliamentary session.

After some initial confusion, the topless women were removed from the parliament's public viewing gallery by security agents.

They were then remanded in detention.

But the magistrate overseeing the case on Wednesday evening decided to release Spain's Lara Alcázar, Frenchwoman Pauline Hillier and the Ukranian Inna Shevchenko.

"In the current social reality it doesn't seem reasonable to argue that a protest where you people uncover their torso is can produce a serious threat to public order," said Madrid judge Ramiro García de Dios Ferreiro.

He also explained that while the protesters' shouts could be considered as a threat to public order, the words they had used were not.

The only condition of the protesters' release is that the three women have a Spanish address for correspondence purposes.