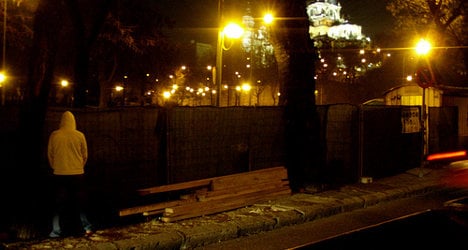 Under the draft plan anyone found soliciting sexual services in public could be fined up to €750 euros ($1,000), with the fine rising to up to €3,000 if it is done near schools or shopping centres.

The text also calls for the introduction of fines of €1,500–€3,000 for anyone publicly offering to transport drug addicts to places where drugs are sold and consumed.

The measure is targeted at so-called "drug taxis" who gather daily at a central Madrid roundabout and offer to drive drug addicts for a fee to a shantytown on the outskirts of Madrid to buy drugs, the spokesman said.

"There was a generalized concern over these issues and the obligation of the municipal government is to regulate the public sphere as much as possible," he said.

The rest of the plan groups together fines already in place for aggressive begging, urinating in the street, leaping on public benches, littering and other anti-social behaviour under one ordinance.

Begging outside of schools and hospitals and littering both carry fines of up to €750 while urinating in the street can be slapped with a fine of €750 or as much as double that.

"The main objective of this ordinance is to preserve the public sphere as a place for coexistence and civic behaviour," the draft document reads in its introduction.

The plan was drawn up by the city council, which is governed by the conservative Popular Party, following consultation with civic groups and business associations.

The text has been handed to opposition parties in the city council who can suggest changes and a final version will be put to a vote early next year.