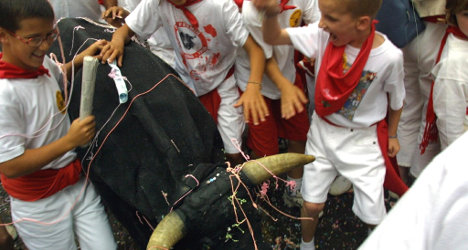 Children in France play with a papier mâché bull during a festival in the town of Bayonne. File photo: Daniel Velez/AFP

The decision comes after a parliamentary committee that oversees the operations of Spanish national broadcaster RTVE rejected a move to ban the showing of bullfights from 6pm to 10pm, or children's viewing time.

The initiative to ban the showing of bullfighting on television came from the Valencian left-wing party Compromís.

It followed hot on the heels of a decision by RTVE to broadcast a bullfight in September.

Defending the plan, Joan Baldoví of the Valencian left-wing party Compromís said the objective was to protect children from "graphic" images like "violence against animals".

He said showing bullfights on television was a "flagrant breach" of the RTVE style guide.

But Miguel Sánchez de Alcázar of Spain's ruling Popular Party (PP) said the proposal came from the "most left of the left" in the parliament.

He accused the plan's backers of carrying out "some sort of ideological crusade"  which was "baseless".

"Bullfighting is the rich and vital poetry of Spain," said the PP politician.

"The 'bulls' are the most refined form of culture in the world", he added, saying that without understanding the bulls, it was impossible to understand Spanish history.

Catalan senator Jordi Guillot of the centre-left grouping Entesa said "the torture of an animal — no matter how much you justify it as tradition, doesn't have any explanation".

The initiative was eventually rejected with 24 against the move and 14 in favour.