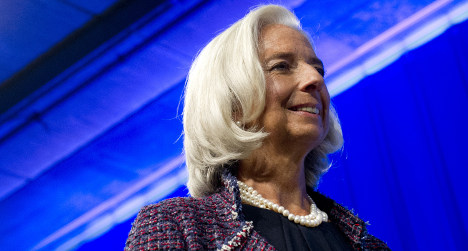 Crisis-victim Spain is set to to contract 1.3 percent this year instead of 1.6 percent, according to a forecast released by the IMF on Tuesday.

The IMF also Spain would see a budget deficit of 6.7 percent this year, just two decimal points above the target set by the EU.

That figure will drop to 5.8 percent in 2014, or within EU targets, the IMF has forecast.

The IMF on Tuesday also raised its forecast for the 17-country euro area to a contraction of 0.4 percent this year compared with a 0.6 percent decline in July.

It now expects an expansion of 1 percent next year instead of 0.9 percent three months ago.

In its latest World Economic Outlook report, the IMF said a series of factors were hampering a true recovery in the 17-state eurozone, including the stringent austerity programmes the fund itself has championed.

The biggest challenge facing eurozone policymakers "is what more they can do to support growth while advancing with adjustment and structural reforms," the IMF said.

The IMF, which has towed a firm line in the bailouts it has taken part in, said fiscal adjustment in the form of austerity programmes has obviously played a role in slowing any recovery.

But the Washington-based institution said policymakers could improve "the quality of fiscal adjustment by broadening the tax base" and pushing through more reforms of welfare entitlements.

"Although there has been some progress on the latter, it is small compared with the challenges presented by population ageing and the revenue losses caused by the Great Recession," it said.

Any recovery is also held back by the eurozone's struggling banks, the IMF said, which are continuing to shed assets to build defences against any resurgence of the debt crisis.

An asset quality review, planned for next year by the European Central Bank as part of a push towards EU banking union, "provides a critical opportunity to put the system on a sounder footing," the IMF said.

Special financing from the ECB for small and medium enterprises should also be on the cards, it said.

But whatever happens with the banks, soaring unemployment in several corners of the eurozone is stoking social tensions and "hurting the reform momentum in the euro area," the IMF said.

Endemic joblessness also weighs on household behaviour and delays the return of consumer spending, a driver of growth the eurozone cannot do without.

And with managers still put off by uncertain demand and prospects for growth, investment decisions by eurozone firms remain cautious.