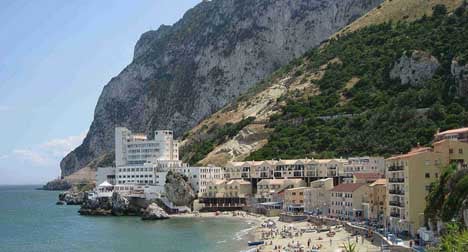 Authors Sam Jordison and Dan Kieran used people's votes on their website craptownreturns.co.uk to come up with the unlucky ranking. Photo: D Stanley/Fickr

It was certainly a surprise entry for the "technically British Overseas Territory and not part of the UK" town, as free tabloid newspaper Metro described Gibraltar.

"It's a rock," were the only words with which The Independent chose to describe the disputed territory's position as sixth worst town in the UK.

The truth is authors Sam Jordison and Dan Kieran have revealed very little about why Gibraltar and the forty other unfortunate towns made it into the book.

"Gibraltar isn't at all ugly and culturally and historically it couldn't be more interesting for such a small place," Carl Mesilio, a local tour guide with Gibraltar Inside-out Rock Tours, told The Local.

"The only downsides I can think of are that some of the 300-year-old buildings in the historic quarter are in disrepair.

"Sometimes our monkeys come down from the nature reserve to the town and litter the streets."

Jordison and Kiernan used people's votes on their website craptownreturns.co.uk to come up with the unlucky ranking.

The publication of previous editions of "Crap Towns" brought widespread condemnation from residents, journalists and politicians across the UK.

As for Gibraltar’s entry into the top ten, some commentators have pointed out that the Rock’s entry, regardless of whether it exudes a high level of shabbiness or tack, is wrong in principle because it’s not part of Britain geographically speaking.

Here are the "ten crappest towns in the UK" according to the survey carried out by Jordison and Kieran: