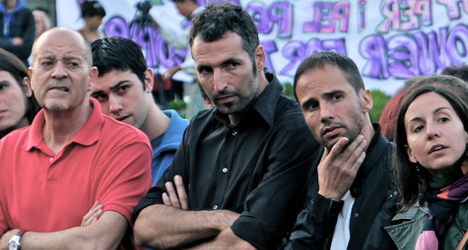 Some 30.9 percent of people polled by top research group CIS said they thought Spain's economy would be in a worse state in a year's time.

One in five people, meanwhile, thought the economy would be in a better state.

The results comes despite recent signs of improvement in the Spanish economy.

In late September, Spain's central bank said the country's two-year recession was drawing to a close.

Spain's government has raised its economic growth forecast for next year to 0.7 percent from 0.5 percent.

Spain's Prime Minister Mariano Rajoy also told the Wall Street Journal that he expected the economy to grow by between 0.1 and 0.2 percent in the third quarter.

In that same interview, Rajoy said he did not believe Spain would need a bailout in 2014.

But the CIS poll shows economic issues continue to dominate the concerns of Spaniards.

Just over three in four people (77.3 percent) said unemployment was one of the top three problems facing the country.

Spain's unemployment rose by 25,572 people in September after several months of decline.

CIS spoke to a representative sample of 2,475 people across Spain to obtain its results.