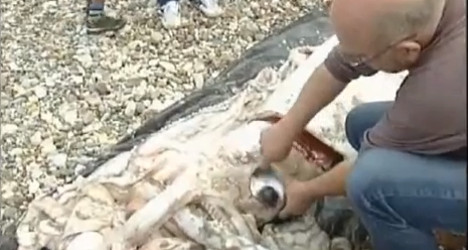 The eyes of giant squid can be as large as a human head. Screen Grab: YouTube

The 180kg (400lb) creature was discovered on La Arena beach in the northern Spanish region of Cantrabria.

It is a member of the Architeuthis dux species, which have the largest eyes in the animal kingdom, the Huffington Post said.

These can be as large as a human head.

The massive squid — which was discovered in very good condition — has now been moved to Cantabria's Maritime Museum in Santander.

Scientists have frozen the animal are now deciding whether it will be displayed.

The first footage of a giant squid in its natural habitat was captured in 2004 but the mysterious animals have long been present in popular mythology.