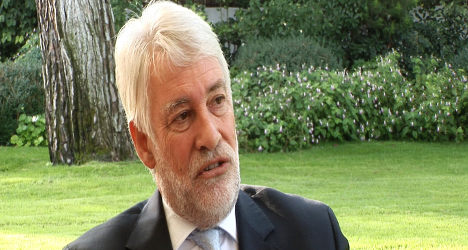 Spain's expats should learn to help themselves, said outgoing ambassador Giles Paxman in a recent interview with the expat television station Viva TV.

“If you’re living here you can prepare for the sort of difficulties you might face so that if those difficulties do occur, they remain simply difficulties and don’t become dramas”, Paxman told Viva.

“A lot of British people who live here don’t speak Spanish and I understand that, but more and more local authorities do have people who speak English,” he said during a 30-minute interview held in the grounds of the British Ambassador's Residence in Madrid.

“Go along to your local town hall and find out what sort of services they’re offering.

“You’ll probably find there’s more than you might imagine including the local, emergency and health services that may be able to help if you face a problem”

Paxman said those are the people Britons should be turning to if they have problems, rather than coming to the Consulates.

The British consular network in Spain is the busiest in the world, handling more than 6000 cases last year.

“We have to focus on the most serious and demanding cases.

“Some of these cases are highly distressing: young people who have come out to Spain and because they haven’t taken the right precautions or because of a moment’s stupidity — often alcohol fuelled — they can ruin their lives.”

That was down nearly 15 percent on the 5,405 Brits who found themselves in difficulties last year.

Consulates have strengthened ties with charities that support British nationals in less critical situations, allowing staff to focus on the most needy, the British Embassy in Madrid said at the time.

Spain is estimated to be home to around 800,000 UK citizens.

For more information about living in Spain as a UK expatriate, visit www.gov.uk