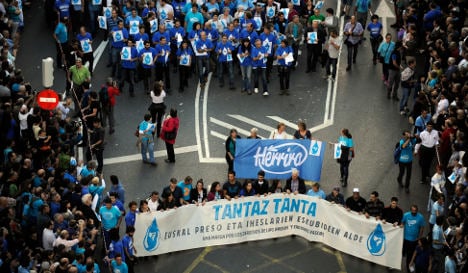 Tens of thousands of people took to the streets Saturday in northern Spain to protest a crackdown on an association that aids jailed members of armed Basque separatist group ETA.

The protest in Bilbao came after police arrested 18 leaders of Herrira, a support group founded to help ETA prisoners and their families, in a series of raids on September 30th.

The Spanish government accuses the group of "organising and supporting demonstrations that praised ETA prisoners and their ideals", and claims it replaced two other associations that had been banned, Askatasuna and Gestoras pro Amnistia.

The 18 leaders, who were charged with belonging to an armed group and funding terrorism, have since been released, four of them on bail.

"The arrest of so many of this organisation's activists and leaders saddens and outrages us," protest organisers said in a statement.

They accused the government of trying to "criminalise the defence of prisoners' rights and Basque political prisoners".

The arrests have angered the Basque community even beyond pro-independence circles. The president of the regional government, Inigo Urkullu, called them a "new obstacle" that "won't help smooth the way to peace".

ETA, blamed for killing 829 people in a 40-year campaign of shootings and bombings for an independent homeland, renounced violence in 2011.

But it has since refused to disarm, insisting Spain and France first agree to talks on issues including the fate of its 600 imprisoned members.