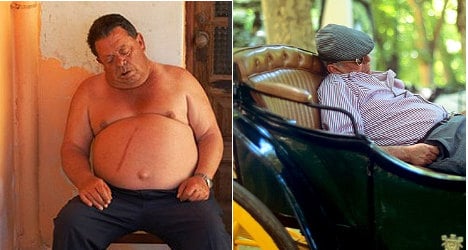 Screenshots of the original and replacement photos used by The Daily Telegraph to go with their article "Time's up for siestas".

The original image, which showed a semi-naked overweight man resting on his belly as he took an afternoon kip in the shade, has now been replaced by a photo of a stereotypical Andalusian horse carriage driver also napping through the summer heat.

Etorne Samanes, a Spaniard who's worked in London for eight years, wrote to The Telegraph to voice her disapproval of the stance the UK newspaper had taken when writing about Spain's conundrum on whether to set the clocks back an hour to up work efficiency.

Spain's ABC newspaper has published an extract from Samanes's letter in which she's quoted as saying "I'm fed up of you and the insulting racism you spew every week about my country".

London-based Samanes also remarked that the image the UK daily initially chose "did not represent" Spain as it played up the stereotype of Spaniards as "lazy".

"We don't want to put the clocks back because not enough is produced or because we want to have a three hour siesta; it's more to do with the fact that nobody likes this time frame that was chosen a long time ago.

Samanes also added that "people working in offices in Spain don't have siestas", as she encouraged journalist Martin Roberts to spend a day in a Spanish workplace to see if people rock up in pyjamas and take long siestas.

It's not the first time the UK newspaper's approach when reporting about Spain has angered Spanish readers.

In May, The Daily Telegraph's journalist Jeremy Warner came under fire after his piece "Spain is insolvent: get your money out while you can" touched a nerve with Spain's general public and political commentators alike.