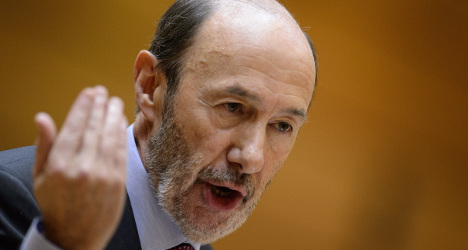 "You reap what you sow," said the leader of the PSOE Alfredo Pérez Rubalcaba of the current tensions between Madrid and the Spanish region of Catalonia.

The ruling Popular Party had "stirred up the winds and didn't know what to do about the storms" Spain's El Mundo newspaper reported Rubalcaba as saying during an interview at Madrid's Liber International Book Fair.

Rajoy's "Catalanphobic attitude" was the cause of those tensions, he added.

The socialist leader's words come a day after the new socialist President of Andalusia Susana Díaz said the PSOE had also been partly responsible for the rise of Catalonia's independence movement.

"It was a mistake to say any Statute of Autonomy of Catalonia that came out of the Catalan Parliament would be accepted," said Díaz.

This was a reference to the promise made by the former Socialist Prime Minister of Spain José Luis Rodríguez Zapatero before the Statute was finalized.

Substantial revisions were later made to the document.

Catalonia hopes to hold a referendum on its future within Spain.

One in two Catalans, 49 percent, back independence while 36 percent are opposed, according to a poll published in daily newspaper El Pais earlier this month.