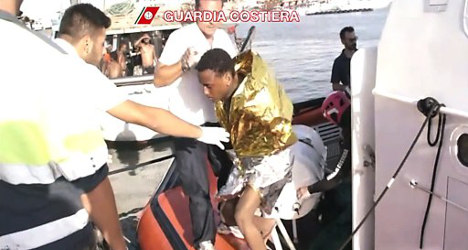 One of the immigrants rescued near Lampedusa on Thursday is helped ashore: as many as 300 people are feared dead. Photo: AFP/Guardia Costiera

"We are sorry to hear about the tragedy off the coast of Lampedusa," Spain's Department of Foreign Affairs tweeted on Thursday.

The accident happened when a boat with up to 500 African asylum seekers caught fire and sank just a few hundred metres off shore in the worst refugee disaster in the Mediterranean in recent times.

More than 300 people are feared dead, including many children, in what the Pope called "a shameful" incident.

Survivors said they were from Eritrea and Somalia and had left from the Libyan port of Misrata.

Many were believed to be heading beyond Italy's borders for other parts of Europe.

Africans hoping to make a life in Spain regularly attempt to cross the narrow Strait of Gibraltar into Spain.

Figures from the UN Refugee Agency UNHCR show that 74 people were reported dead or missing while attempting this voyage in 2010 – the last year for which figures are available.

A total of 41 Africans have died trying to enter the Spanish cities of Ceuta and Melilla in Africa since January last year, including 18 so far in 2013, according to Morocco's Rif Association for Human Rights.

For extensive coverage of the Lampedusa tragedy visit The Local Italy.