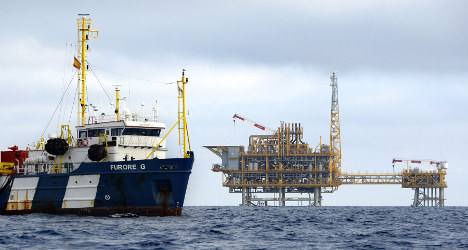 In the past month, some 400 earthquakes have rattled the Gulf of Valencia, where a depleted oil reservoir is being used as a giant gas storage facility.

The activity has frightened residents but so far caused no damage.

"There is a high probability of a relationship between the injections of gas into the storage facility between June 13th and September 16th and the seismic movements on the coastal zone facing the facility," he told a news conference after a weekly meeting of government ministers.

Since Friday morning another 15 quakes, the largest measuring 3.7 on the Richter scale, had rattled the zone, which is not normally known for its seismic activity, the National Geological Institute said.

The government ordered Spanish firm Escal UGS, which owns and runs the facility, to halt operations on September 26th — 10 days after the company had already stopped pumping in gas.

"This halt will continue in force until there is an absolute guarantee of 100 percent safety for the whole population," the industry minister said.

Known as Project Castor, the scheme aims to store gas in a depleted oil reservoir 1.7 kilometres (1.05 miles) under the Mediterranean Sea and send it via a pipeline to Spain's national grid.

A commission of experts is studying the quakes, the largest of which hit on Tuesday registering 4.2 on the Richter scale, the industry minister said.

Valencia and the neighbouring region of Catalonia have activated the lowest level of their earthquake emergency plans so as to reassure the population, he said.

The president of Spain's College of Geologists, Luis Suarez, told AFP there were "rational indications" linking the earthquakes to the Castor project.

The plant is located near a fault line that normally produces very little seismic activity but the gas injections were causing the accumulated energy that exists there to be released, he said.