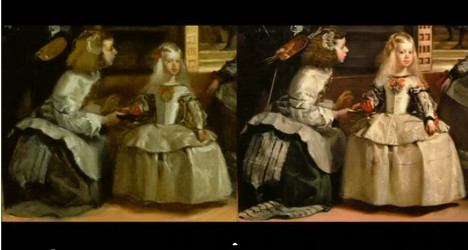 Whatever the results of future scientific research are, the two pieces will hang side by side this month at the Prado. Photo: YouTube

After twenty years of research, Dr. Matías Díaz Padrón believes he has sufficient proof that 15th century Spanish artist Diego Velázquez painted an earlier version of his Las Meninas painting, or Maids of Honour as it is known in English.

The original draft or "modeletto", as the former art professor at Madrid’s Complutense University calls it, hangs in Kingston Lacy country house in the county of Dorset, in South West England.

Hundreds of guests and journalists gathered at Spain’s Royal Academy of Fine Arts on Wednesday to hear Dr. Díaz Padrón explain why what was long thought to be another artist’s copy of Velázquez’s chef d’oeuvre was in fact the first depiction of it by the baroque artist himself.

The art expert pointed out that "17th and 18th century professors of the Royal Academy, including Francisco Goya" had recognized the piece as Velázquez's work, but that in later centuries the painting had somehow come to be attributed to the artist’s son-in-law, Juan Bautista Martínez del Mazo.

Madrid's Prado Museum isn't convinced by Díaz Padrón’s findings though, having already denied that the Kingston Lacy’s "Meninas" is the original.

Whatever the results of future scientific research are, the two pieces will hang side by side this month at the Prado.

The Kingston Lacy painting, which now belongs to the British National Trust, was originally bought by English landowner and art collector William Bankes in the 19th century.