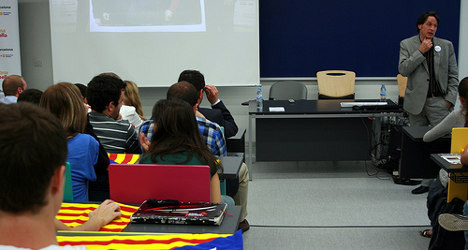 A Barcelona institution was the only Spanish university on the list. File photo: Esquerra Barcelona/Flickr

Barcelona's Pompeu Fabra University (UPF) — with some 9,300 students — was the sole representative for Spain in the TES rankings.

The institution which was named Spain's top research institution in 2012 came in at number 164 on the TES list.

"The UPF rates this result very highly," a university spokesperson told the Local.

"This is good indication that our model — based on high quality teaching, a close relationship with students, top quality research and an international focus — is successful".

Overall, the rankings, were "good and bad news for Spain" said TES editor Phil Baty in a statement on the results.

"While Pompeu Fabra seems to have defied Spain’s economic crisis, its top universities as a whole appear to be struggling."

Spain's lack of success in the TES ranking appears to be part of a generally gloomy outlook for Europe's PIGS nations, with Italy, Greece and Portugal all failing to make an appearance.

"The power shift from West to East is not as dramatic this year as the US and the UK have both managed to arrest alarming falls at the national level," said Baty.

"But the trend is continuing: the vast majority of continental Europe’s leading institutions have slipped, while those leading the East Asian nations have for the most part risen yet again."

The global top-ten was dominated by American and British universities, with the California Institute of Technology retaining the top spot, while Harvard and the UK's Oxford University shared second spot.

The next cabs off the rank were Stanford University, the Massachusetts Institute of Technology, and Princeton University, with University of Cambridge coming in at number seven.