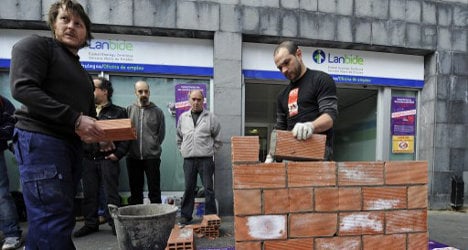 "The deterioration of the job market has hit bottom," he added.

"Spain in 2014 will be in condition to grow and create jobs."

Montoro spoke as the government said the number of registered unemployed rose in September by about 25,500 people from the previous month to reach 4.72 million as a summer jobs boom ended.

But the government stressed this was the smallest increase in joblessness in the month of September since 2007.

The government estimates the Spanish economy emerged this quarter from a double-dip recession brought on by the bursting of a housing bubble in 2008 and will post growth of 0.7 percent next year.

But despite signs of growth, the rise in unemployment illustrates a cyclical inevitability, said Raj Badiani, an economist at  IHS Global Insight in London.

Retailers will continue to cut their workforces as consumers rein in spending and government austerity measures will mean further public sector job losses, he said.

"Job losses continue alarmingly," Badiani added with job seekers entering the cash economy or "leaving Spain in search of employment across the EU."

Spain's official unemployment rate, which is calculated on a broad household survey released every three months, hit 26.26 percent in the second quarter of this year or 5.8 million people, from a record  27.16 percent in the first quarter.

The government predicts the unemployment rate will drop to 25.9 percent in 2014 after ending 2013 at 26.9 percent, a forecast which most analysts see as too rosy.

"The projection for the evolution of the job market is a bit optimistic. The level of growth that is projected for next year seems insufficient," said Jesus Castillo, economist at French investment bank Natixis in Paris.

Natixis predicts the unemployment rate will stand at 26.5 percent while the International Monetary Fund sees it climbing to 27 percent and the Organisation for Economic Cooperation and Development see it rising to 28 percent.

"In theory below growth of 2.0 percent, there will be no creation of employment," said Javier Velazquez, an economics professor at Madrid's Complutense University.

Any drop in unemployment was due in large part to foreign immigrants packing up their bags and abandoning Spain and people dropping out of the job market, he added.

"The fact that unemployment fell does not mean that employment has risen.

There are people who move to the category of 'the discouraged', who are inactive, who have not even signed up at job centres because they think it is a waste of time," he said.

Unions complain that the bulk of the jobs that are being created are on short-term contracts that offer little security.

"It is true that the volume of hiring has increased a little bit. The problem is that the new contracts that are being signed are part-time and temporary, therefore they will be destroyed," said Paloma Lopez who is in charge of employment at Spain's largest trade union, CCOO.

The Washington-based IMF has warned that Spain faces five more years with an unemployment rate topping 25 percent unless it enacts new reforms including measures to help firms slash wages instead of axing staff.