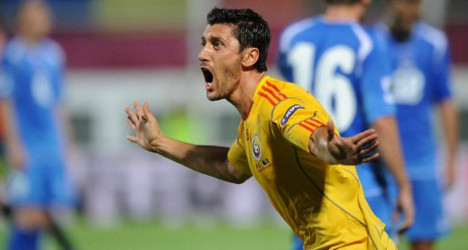 The Romanian striker, who also plays as a winger, has just been signed by the Spanish First Division team from German club Schalke 04. Photo: Daniel Mihailescu/AFP

Ciprian Marica may have given his signing for Madrid football side Getafe a bit more thought had he been pre-warned about the connotation his surname holds in the Spanish language.

The Romanian striker, who also plays as a winger, has just been signed by the Spanish First Division team from German club Schalke 04.

Marica, who will be presented on Wednesday in a press conference at Getafe's Coliseum stadium, is likely to get asked by journalists about the unfortunate circumstances he may have to confront from opponents and away fans because of his surname.

The Spanish club has therefore decided to use the Romanian striker's first name instead of his surname to avoid any possible abuse or mocking, sports daily Marca reported.

Spain's National Language Academy states one of the definitions of "marica" as being a homosexual or an effeminate man.

The meaning of the word can depend on how it’s used, as the tone in which it’s uttered can evoke both a joking way to address a friend and an insult used against a gay person.

Marica is a common surname in Romania and there are already plenty of citizens from the Eastern European country living in Spain who share the same as the football player.