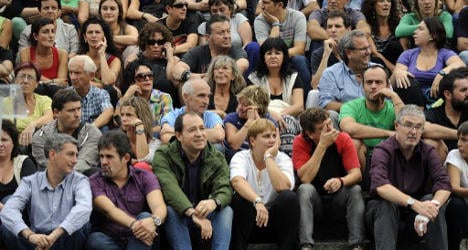 Hundreds of people and representatives of pro-independence Basque groups at a protest to denounce the police raids in Bilbao on Tuesday. Photo: Rafa Rivas/AFP

The demonstrators rallied in the centre of the Basque city to protest against the police operation against Herrira, which was founded in February 2012 to help Eta prisoners and their families, and demand that the 18 people arrested be released.

The protest was organized by pro-independence Basque groups, who called for another demonstration on Saturday in Bilbao, the Basque region's economic capital, against the police operation.

Police detained the Herrira leaders on Monday in simultaneous raids carried out in Bilbao, Hernani, Pamplona and Vitoria and closed down 38 websites run by the group as well as dozens of Facebook and Twitter accounts.

They also froze its bank accounts.

The Spanish government accuses Herrira of "organizing and supporting demonstrations that praised Eta prisoners and their ideals" and it argues that the group had replaced two other associations that aid Eta prisoners that had been banned in Spain, Askatasuna and Gestoras pro Amnistia.

Eta is blamed for the deaths of 829 people in a four-decade campaign of shootings and bombings for an independent homeland in northern Spain and southern France.

The arrests come as Eta is under pressure to give up its arms. In October 2011 it declared a "definitive end to armed activity" but it has not formally disarmed nor disbanded as the governments of Spain and France demand.

In a statement published Friday in Basque newspaper Gara, Eta said it refuses to "renounce its past struggle" for Basque independence and called on the Spanish government to negotiate.

In April a suspected top commander of Eta got a life sentence in France for the 2007 murder of two Spanish police officers.

Many more of its leaders have been arrested over recent years.

"Eta as an organisation, no longer exists and the Eta that carried out attacks will not longer return to carry out attacks," Interior Minister Jorge Fernández Diaz said on Tuesday.

The regional Basque government hailed the arrests of the Herrira members.

"They remind us of past eras, which gladly have been surpassed, and which we don't want to see come back," the spokesman for the Basque regional government, Josu Erkoreka, told reporters.