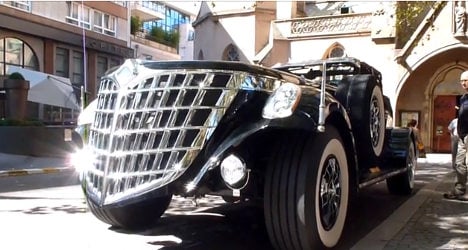 The Sheikh's custom Black Spider (pictured here in France) was too large to be towed away. Screen grab: YouTube

Sheikh Hamad bin Hamdan Al Nahya of Abu Dhabi parked his custom 'Black Spider' in the square during a recent visit to the city.

A guest at city's exclusive Hotel Westin, he resorted to the parking arrangements because his car didn't fit in the hotel's car park, local daily Levante reported.

The car remained in the prominent square for several hours and sparked plenty of interest among locals.

But Sheikh Hamad escaped a parking fine because he didn't have European Union number plates.

Local Valencia councillor Miguel Domínguez also said the Black Spider was simply too large to be towed away.

The Sheikh's public relations, team, meanwhile, said the "exclusive car" had been displayed as an act of "deference" to the host city.

It was "disrespectful and immoral that in a period of crisis" that the Town Hall had allowed the parking of the car with the "only aim of demonstrating the economic capacity of the sheikh", Ribó said.

The sheikh is a member of the Abu Dhabi Royal Ruling Family in the United Arab Emirates.

Sheikh Hamad goes by the name of the Rainbow Sheikh because of his collection of seven Mercedes Benz 500 SEL class cars in different colours — one for each day of the week.

He also holds the Guinness Book of World records for the largest caravan in the world.