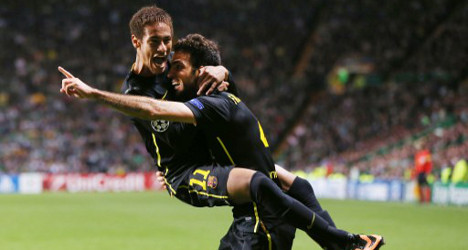 The Spanish champions dominated possession but failed to test goalkeeper Fraser Forster in the opening 45 minutes with Celtic's Georgios Samaras having the best chance of the half.

But it was a moment of madness from skipper Scott Brown that cost Celtic dearly as the midfielder was shown a straight red card in the 59th minute as he appeared to direct a sly kick at Neymar after tripping the Brazilian superstar.

But, moments after creating the best chance of the match, substitute Alexis Sanchez, only on the pitch for two minutes, crossed for former Arsenal man Fabregas to nod home and gain revenge for their defeat at the same venue last season.

It means Barca top Group H on six points after AC Milan and Ajax finished 1-1 and handed Celtic, who prop up the group looking for their first point, a rare home defeat in the Champions League.

Barcelona manager Gerardo Martino, whose side have made a 100 percent start to their season, said Celtic had been their toughest opponents to date.

This match has been the most demanding that we have had to play so far because of the rival and the competition and Victor Valdes made very important saves for us as well," said Martino.

But we managed to combine long balls with our one-touch game and that managed to make us more dynamic and unpredictable.

Celtic manager Neil Lennon felt the decision to send Brown off was soft.

If there was any contact it was minimal. I think there was a lot more going on in the game that merited heavier punishment, Lennon said.

It was a game-changing decision. Obviously it is very difficult playing against Barcelona with 11 players but with 10 it is even more difficult but we played very well tonight.

Barcelona, who were missing Lionel Messi, Javier Mascherano, Jordi Alba and Carles Puyol through injury, had opted for Neymar, Fabregas and Pedro Rodriguez up front while Celtic manager Neil Lennon retained faith in the same starting 11 that were unlucky to lose 2-0 to Milan in the San Siro a fortnight ago.

Even without the injured Messi, who scored a hat-trick in their opening 4-0 win over Ajax, Barcelona showed their class early on as their slick possession football forced two early corners.

However, it was a fast break from the Hoops that created the first real opportunity after just five minutes. Kris Commons played in Samaras who, from a tight angle, forced keeper Valdes to turn his shot out for a corner that Mikael Lustig headed well wide.

Andres Iniesta then got sight of the Celtic goal but the influential midfielder saw his strike sail over without troubling Fraser Forster.

Barca continued to ping the passes about but it took until the 41st minute for them to muster up their first real opportunity. Daniel Alves sent an inviting ball into the box from the right that Neymar prodded narrowly wide.

Xavi Hernandez then tested Forster with a curling free-kick from wide on the left that the 'keeper made a meal of and was relieved to see go out for a corner after coming off his shoulder.

The game changed when skipper Brown was ordered off in the 59th minute.

The Celtic midfielder's sly kick at Neymar on the deck after tripping the Brazilian 25 yards out as he raced towards goal was spotted by French referee Stephane Lannoy, who had no hesitation in handing him a straight red card.

Moments after coming on, Scottish international Forrest nearly had Celtic in front when his fierce half-volley was acrobatically turned over by Valdes after the 'keeper saw it late.

Valdes was then caught napping at the resultant corner but Mulgrew had his head in his hands after he nodded wide of the unprotected goal.

Moments after creating the best two chances of the match Celtic were caught with a sucker punch when Fabregas put Barça ahead.

Alexis raced behind the Celtic defence to latch on to a Neymar pass and cross for the former Arsenal man to direct a header back across Forster and looping into the bottom corner.