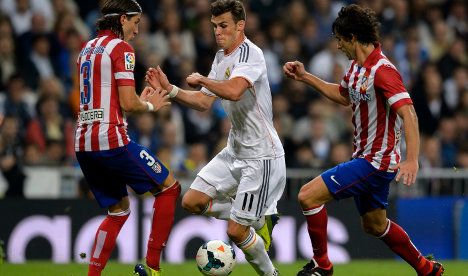 Real Madrid coach Carlo Ancelotti admitted that Atletico Madrid were deserving victors after they handed him his first defeat in charge of Los Blancos with a 1-0 success at the Santiago Bernabeu on Saturday night.

Gareth Bale finally made his home debut for Real as a second-half substitute, but Diego Costa was the star of the show as he scored the only goal of the game after just 11 minutes to maintain Atletico's 100 percent start to the season.

And despite Diego Simeone's men sitting back and defending their lead, Ancelotti accepted they still had the better chances to score a second on the counter-attack.

"Atletico Madrid deserved to win. They were very defensive but they scored a goal on the counter-attack," he told a press conference.

"They showed they are a very organised team with a lot of quality."

It was the fourth time in seven league games that Real had fallen behind early on in the game and Ancelotti is determined that they have to start games better and inject more speed into their play.

"I think we had the same problem as in the other games. Our build-up play is slow and when the ball arrives further up the pitch there are no spaces to look for a positive solution.

"When you play against a team with good defensive organisation it is more difficult and the goal made things even harder for us."

"We started very well in pre-season but over the past week we have had two very bad games. We need to have better attitude and concentration. It is not an easy moment because losing at home is never good, but it is obvious that we need to play more quickly and fix the problem."

Victory for Atletico sealed their best ever start to a league campaign with seven consecutive victories.

Los Rojiblancos are currently tied at the top of the table with Barcelona on 21 points, five clear of their city rivals in third.

However, Atletico boss Diego Simeone still believes that Real and Barcelona's strength in depth throughout the course of the season will prove too much for Atletico to compete with.

"In the long-term throughout 38 games, the financial power and individual quality that Barcelona and Real Madrid have is superior to us. We have our own strengths and we try to give everything we have in every match."

"We are working well and at the moment for are being rewarded for that work as a team."