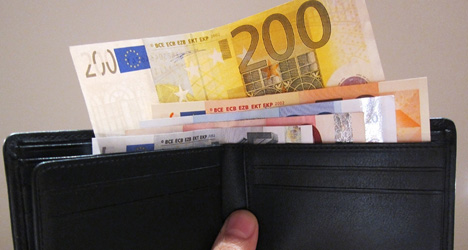 British tourists emptied their wallets of €8.3 billion in the first 8 months of 2013 to become Spain's biggest spenders. Photo: Flickr/chalo84

The figures were presented on Friday by Egatur, based on a tourist expenditure survey commissioned by Spain’s Ministry of Industry, Energy and Tourism.

The average amount spent each day per tourist in the year up to and including August rose by 2.2 percent, to €107, while the average total expenditure increased by 2.5 percent to €958, according to Spanish daily Te Interesa.

Most of the spending was by British tourists, whose €8.257 billion represented 20.4% of the total and an increase of 6.1 percent on the same period last year.

It was followed by the Balearic Islands with €7.943 billion, a 9 percent increase.

Like the accumulated spending data and the average spending per person, this represented a record high.

In August, the average spending per tourist stood at €997, up 4.7 percent, while the average daily expenditure went up 2.8 percent to €101.