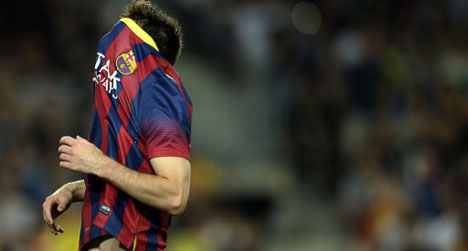 Nowhere to hide: The Argentine and his father Jorge Messi are summoned to go before a judge in the coastal town where the player lives, Gava near Barcelona. Photo: Lluis Gené/AFP

The Argentine and his father Jorge Messi are summoned to go before a judge in the coastal town where the player lives, Gava near Barcelona, accused of evading tax on his image rights to the tune of €4.16 million ($5 million, £3.5 million).

Messi's form on the field has scarcely been affected, with the Barcelona forward scoring 10 goals in just seven matches this season as the Spanish champions remain unbeaten.

"I am not worried, I'm always on the sidelines of all that, just like my dad. We have our lawyers and our advisors who handle these things. We trust in them and they will solve the issue," he said in July.

The case began in June when a prosecutor accused the Messis of evading tax by ceding the player's image rights to "purely instrumental entities" in tax havens such as Belize and Uruguay.

According to the prosecutor's report, Messi "obtained significant income" from image rights between 2006 and 2009 on which he "should have paid tax in his subsequent declarations" to the Spanish authorities and failed to do so.

Although the alleged offences are punishable by a jail sentence, the Messis paid the tax authorities €5 million in August (the €4.16 million claimed by the taxman plus interest), which will significantly reduce any sentence should they be found guilty.

The news caused astonishment in Spain where Messi is seen as a more humble figure than other football stars, particularly his Real Madrid rival Cristiano Ronaldo.

"He has a very professional image, of being focused on what he does and very close to the public," said Carles Canto, a marketing expert for IMG Consulting.

Despite the initial consternation, the player's popularity doesn't appear to have diminished at all due to the allegations.

"In football terms, it hasn't affected him at all. He is still a genius and practically the best player of all time," said one supporter, Juan Rivero, a member of the Barca fans' association.

Enric Baneres, a sports journalist for Catalan daily La Vanguardia, added: "Messi's image amongst Barcelona fans is so solid that it is very difficult for it to be clouded by this case.

"Tax evasion is something so common in Spain, like the siesta or paella, that the people are very permissive with it."

The player's defence looks set to point the finger at his former agent Rodolfo Schinocca.

According to a document sent by Messi's father to the court, obtained by Catalan daily El Periodico, Schinocca was put in charge of organising the "structure and management" of the income from Messi's image rights.

Schinocca told Spanish radio station Cope that he had nothing to do with the case because he stopped working with the Messis in 2006, before the supposed offences took place. He accused Jorge Messi of wanting an off-shore account to manage the income from the image rights.

While Messi's 323 goals in 387 games for Barca have made him irreplaceable on the field, his income from endorsements off it has also soared.

Between 2007 and 2009 he earned more than €10.17 million in image rights. American magazine Forbes lists him as the 10th highest paid sportsman in the world with an annual income of $21 million from endorsements alone.

Despite the court case, Messi continues to lead advertising campaigns for brands like Adidas and video games maker EA Sports, whose latest version of the immensely popular FIFA franchise was released in Spain the day before he was due to appear in court with the Argentine on the front cover.

"Whilst the player is so good and his behaviour is quite normal and proper, it will not affect him too much," said Canto, adding that according to a study carried out by his firm in 2012, Messi has the best image of any foreign sportsman in Spain.