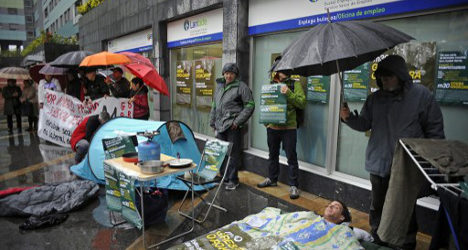 A protest against against government's cuts and social exclusion outside an unemployment office in Spain's Basque Country in May. File photo: Rafa Rivas

A new pay freeze for civil servants and a pension reform which will stop indexing payouts to inflation are among the measures which Prime Minister Mariano Rajoy's conservative government is expected to adopt.

The 2014 budget "will be the most boring of these last few years" because "it will seem like the twin brother of this year's", daily business newspaper Cinco Dias wrote Wednesday in an editorial.

After a decade-long housing bubble burst in 2008, Spain pushed through painful spending cuts to bring down its soaring public deficit and get its accounts in order under pressure from the European Union.

The government announced in 2012 that it aimed for savings of €150 billion ($200 billion) by the end of 2014, mainly in the areas of health and education, which sparked noisy street protests in a country where one in four people is out of work.

The economy has improved over the last year, helped by a rise in exports and a boom in tourism as northern European sun seekers shun troubled rival destinations in the Middle East like Egypt.

Spain emerged from recession in the third quarter, with an estimated growth of 0.1 to 0.2 percent, Rajoy said in an interview published in the Wall Street Journal on Tuesday.

He also raised economic growth forecast for the eurozone's fourth-largest economy for 2014 to 0.7 percent from 0.5 percent.

But despite the improved economic outlook analysts said the government had to stick to its austere measures if it is to meet its goal of slashing its deficit to 6.5 percent this year and 5.8 percent next year.

"It is fundamental that the government advance in the process of budget consolidation," Spanish bank Bankinter said in a research note.

The 2014 budget will likely increase the Value Added Tax that is slapped on health services from 10 percent to 21 percent, a measure which is estimated to bring in €1 billion to state coffers, it said.

"I am conscious that we have demanded a great effort from public workers," Rajoy said Tuesday in parliament.

Public worker salaries were cut by an average of 5.0 percent in 2010 and have been frozen each year since then.

While the government will this year reintroduce an annual Christmas bonus for public workers which was slashed in 2012 and keep it in 2014, Rajoy put off any pay raise for civil servants.

"As soon as we can, we will improve their situation," he told parliament.

The government will approve a long-awaited pension reform along with the draft budget at a weekly cabinet meeting on Friday.

While Rajoy has long argued that his priority is to maintain pensioners' purchasing power, the reform will end the indexation of pensions to inflation, a measure which was been angrily opposed by unions.

Ensuring that the impact of inflation is taken into account through an equivalent rise in pensions is the only way to guarantee retirees' purchasing power, according to the UGT union, Spain's second biggest union which represents a wide range of public sector workers and pensioners.

The reform will cause pensioners to lose between 20 percent and 28 percent of their purchasing power over the next decade, the union estimates.

Spain's largest union, the CCOO, predicts the reform will cause pensioners' purchasing power to fall between 14.9 percent and 28.3 percent over the next 15 years.

"It's a useless and unwelcome reform," it said in a statement.

The government argues the pension reform, which links payments to life expectancy and to economic cycles, will better guarantee purchasing power.

Under the reform, pensions will rise by 0.25 percent in 2014 while the average inflation rate this year stands at 2.1 percent. 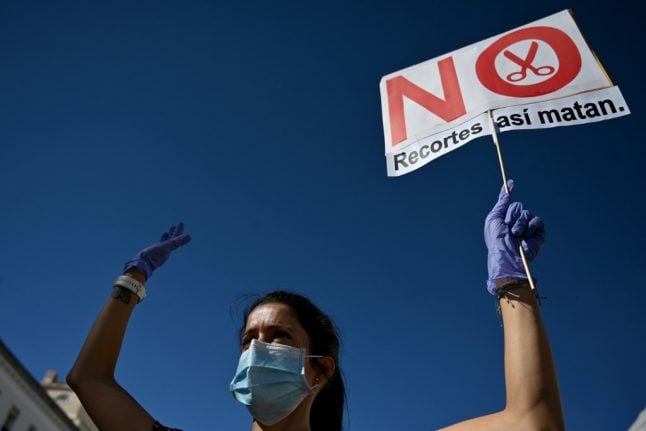