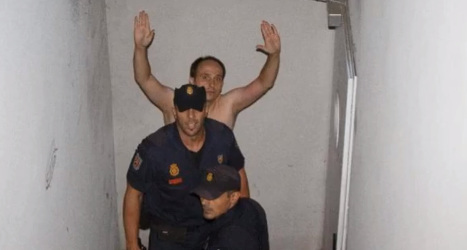 The nude figure ran through the media scrum which had gathered at Madrid's private Quiron Hospital hospital in anticipation of King Juan Carlos' arrival.

The man, who identified himself as 38-year-old Carlos Diaz Fernández, was quickly detained by police and taken — clothed — into custody at Madrid's Pozuelo de Alarcón police station.

A 38-year-old from the southern Spanish city of Almeria, Fernández does not have a criminal record , local daily  La Voz de Almería reported on Tuesday.

Queen Sofia was just entering the hospital during Fernández' protest, but it was unclear whether she saw the naked protest, images of which were broadcast on public television.