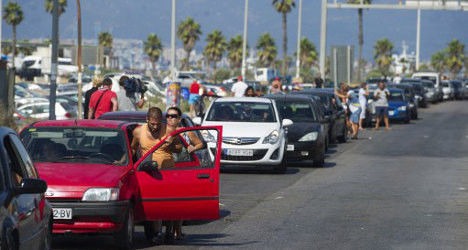 Spain introduced stringent border checks in July which have led to long waits for motorists trying to enter the territory. Photo: Marcos Moreno/AFP

The team will centre on tit-for-tat allegations of smuggling and border control abuses, the European Commission said on Tuesday.

Monitors will also attempt to soothe the row dividing London and Madrid over the British Mediterranean outcrop.

The latest episode in the long dispute broke out in July after Spain introduced stringent border checks which have led to long waits for motorists trying to enter the territory.

Gibraltar has accused Madrid of imposing the checks in retaliation for its decision to place concrete blocks in the sea as part of its efforts to improve fishing.

Spain denies this and blames Gibraltar for a sudden increase in tobacco smuggling to the Spanish mainland.

"The delegation will look at installations and checks carried out at the entry and exit… on both sides of the border as well as issues related to alleged smuggling," the commission said in a memo explaining the plans.

But Gibraltar have already accused Spain of changing its border control tactics in the lead-up to the arrival of the monitoring team.

They say Spanish Civil Guard officers at the border have switched from checking cars in the main traffic lanes to conducting those checks in a cordoned off side lane.

This means the flow of traffic is no longer impeded by checks, the Gibraltar Government argues.

"However, the Government of Gibraltar has weeks of video evidence to show that Spanish procedures were changed only a matter of days before the delegation’s visit."