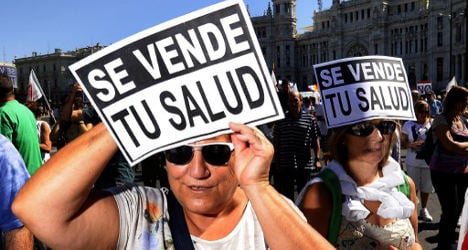 Protesters with posters reading "You health for sale" at a demonstration against budget cuts and plans to partly privatize medical services in Madrid on Sunday. Photo: Gerard Julien/AFP

Despite the government's recent claims that the economic crisis is easing, Medicos del Mundo said last year's spending cuts were hitting the most vulnerable people and raising health risks.

"The impact we have seen in the year since the reform is simply devastating," the president of the organisation, Alvaro Gonzalez, told a news conference, launching a new publicity campaign against the cuts.

Citing government figures, he said 873,000 people had had their access to Spain's free public healthcare system discontinued since September 2012 — most of them immigrants whose entitlement lapsed because they lost their jobs.

The healthcare cuts passed in 2012 were part of urgent reforms that the government said were indispensable to save tens of billions of euros and stabilize the public finances.

Prime Minister Mariano Rajoy said in an interview published on Tuesday that Spain had emerged from recession in the current quarter with estimated economic growth of 0.1 to 0.2 percent.

"The government is insisting that the economy is recovering… but still our health system, which in past years was the envy of neighbouring countries, is suffering one cut after another," Gonzalez said.

Some of the regional authorities that control local health budgets have also started making patients pay part of the cost of their prescriptions.

"This has meant that 16 percent of the pensioners in our country are being cast out of the healthcare system because they cannot meet the cost of paying for medicine for their chronic illnesses," Gonzalez said.

Helena Legido-Quigley, a Spanish researcher from the London School of Hygiene and Tropical Medicine, said similar cuts imposed two years earlier in Greece had led to a rise in HIV infections and even outbreaks of malaria.

"What's happening in Greece could happen in Spain, because it's going the same way in terms of the reforms," she told news agency AFP at the Medicos Del Mundo conference.

The government has also ended public healthcare for immigrants from some countries who do not have residency permits.

"The cuts to healthcare are especially harming those most affected by the recession: immigrants, people looking after those with special needs, families on low incomes and pensioners," Gonzalez said.