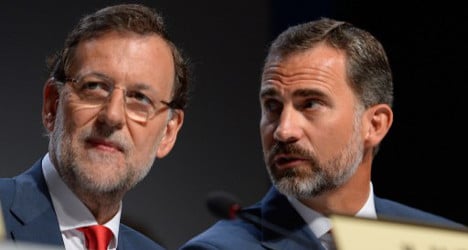 "The task now is to achieve a vigorous recovery that allows us to create jobs," the Spanish leader told the influential US business paper.

Speaking the day after German elections won in emphatic style by Chancellor Angel Merkel, Rajoy continued to push for a more integrated eurozone, both politically and economically.

He told the WSJ he was "reasonably satisfied" with the banking union project although progress was slower than he'd wish for.

Talking about Spain's domestic economy, Rajoy said his medicine was working and "things are on a good path".

He added Spain's banking system was "more transparent, more solvent and better capitalized" since it got a €41.3 billion ($56 billion) bailout loan from the European Union last year".

But Rajoy also said the country wouldn't see real recovery until Spaniards opened up their wallets and started spending again.

Houses prices also needed to bottom out and the country's external debt needed to stabilize, the Spanish leader said.

"If you ask me today, I would say that Spain won't need to extend the [bailout program] into 2014," Rajoy said, although he did also say this would become clearer when the EU and other creditors carried out assessments in November.

Rajoy was also coy on unemployment: "I won't dare to speculate," were his words on how long it might take to lower the country's jobless rate.

The Prime Minister is giving himself a two-year time frame to prove to voters that things are on the up.

"If people see that what we have done is producing results, and also see that what has been done is creating a solid base for the future, I think we are in condition to recover," he told the Wall Street Journal.

"But you can't govern a country thinking every day whether or not they're going to vote for you."

On the Catalonia question, Rajoy was clear.

"I'm Spanish, and I think all of us will be better off within Spain," he said.

"I can't perceive of Catalonia outside the European Union, that would be something completely absurd."