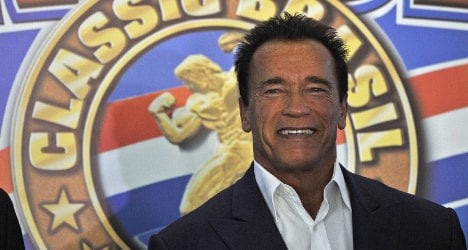 Arnold Fighters is a mixed martial event featuring everything from boxing to Brazilian Jujutsu.

Advertising itself as "the worlds biggest and toughest sporting event", the show is set to hit the Madrid Arena and other venues from October 11th to October 13th.

It promises plenty of oiled up bodies, lots of bruises and even a visit from the ex-Governor of California Arnold Schwarzenegger.

But the martial arts roadshow has hit a speed bump, according to Spain's El Mundo newspaper.

The event is being held illegally, the technical director of Spain's Combat Sports Federation Francisco Iglesias, told the daily.

Those rules — set out by the National Sports Council of Spain cover everything from "an obligatory medical team, trained referees and minimum security requirements for participants", Iglesias said.

The comments carry particular weight as one of the Arnie Fighters venues is Madrid Arena. In November 2012, five teenagers were crushed to death after the organizers of a mass Halloween party sold too many tickets to the festival.

But the company behind Arnie Fighters, Dreams Theater, says they are a "huge event at a global level" and "don't don't need to meet Spanish federation rules".

"In the US we employ more people, for example, than the Olympic games in Atlanta," the company said in the statement on its website.

The Spanish federation "are going after us because they are jealous that we create so much employment and wealth," said Dreams Theater.

"If there is an accident, we'll have to wait and see who is responsible," responded the Spanish sports official Iglesias.

The full-throttle trailer for the Arnie Fighters event in Spain.