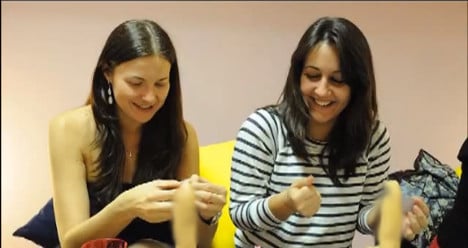 Over a thousand Russian women a month are already receiving their certificate of sexual excellence from the Seks.rf sex academies in Moscow and Saint Petersburg. Photo: YouTube

Over a thousand Russian women a month are already receiving their certificate of sexual excellence from the Seks.rf sex academies in Moscow and the newly-opened Saint Petersburg branch.

Company boss Ekaterina Liubimova has now set her sights on Spain, where she plans to set up two new oral sex academies in Ibiza and Tenerife.

"Some of our pupils were married to Spaniards and Italians," Liubimova told Spanish daily El Mundo.

"The women, and the men of course, were very happy with what they learned."

Liubimova, who told El Mundo of her love of Pedro Almodóvar, has designed her studios in much the same way as the eccentric Spanish director decorates his movie sets, with jazzy colours, flowers and, well, sex toys.

Instead the workshops teach women how to "awaken their inner beast" in a practical way.

Liubimova is proud of the fact that women from as far afield as Japan are able to let loose and get the sex training they need to spice up their marriages and relationships.

Her aim is to provide women "an arsenal of sexual techniques" so that they be "actresses and directors in the bedroom".

Students pay to the tune of €100 for a three-and-a-half-hour course that Liubimova claims is the only one of its kind in the world.