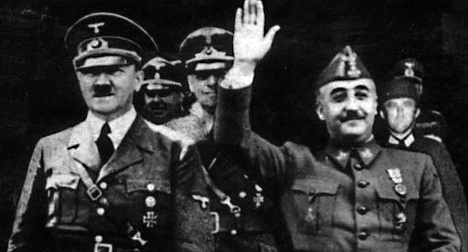 Hitler and Franco met in Hendaye in the French Basque Country in October 1940. Screen grab: YouTube

It was 1975; she was 17 and had been hauled in for joining a demonstration by Communist youth activists against dictator Francisco Franco.

Following his death that same year, and after four ensuing decades of democracy in Spain, she has had no compensation, nor even an apology.

Now she is trying to bring her torturers to justice.

"They hit me. The violence was physical and also psychological," she told reporters in Madrid, alongside other survivors.

"They didn't let you sleep. There was a (light) bulb always turned on in the cell and you didn't know if it was day or night," she recalled.

"We were less than nothing to them. They were constantly showing us that they could do what they wanted with us."

Prevented from pursuing their torturers in the Spanish courts by a 1977 amnesty law, Rumin and some 50 others have brought charges for crimes against humanity against the policemen they say tortured them. The case is being heard in Argentina under "universal jurisdiction".

"We are asking for society at least to condemn what happened," Rumin said. "I want the whole world to know who these people are and what they did."

Servini de Cubria has claimed the doctrine of universal jurisdiction, which allows courts to try certain cases of human rights abuses committed in other countries.

Separately, a working group of the United Nations on Monday began a visit to Spain to investigate masses of alleged forced disappearances under Franco's regime.

When Spain made its delicate transition to democracy after Franco's death, the political groups that forged its new constitution agreed on an amnesty for political prisoners that also served to protect officials from score-settling.

It was seen as a necessity by the leaders tasked with unifying the country still smarting from the wounds of the 1936-1939 civil war and the ensuing decades of dictatorship.

But it has never satisfied the victims and their families, nor those who believe that international laws against the worst human rights violations should trump the national amnesty.

Landmark was 'a torture chamber'

Felisa Echegoyen was 27 when the police seized her for belonging to a left-wing group and took her to the cells in the police headquarters on Sol.

"That building was a torture chamber. No one wanted to go near it," she said in a soft voice.

The building, a landmark on the square in the heart of Madrid, today houses the headquarters of Madrid's regional government.

Another of the plaintiffs in the Argentine suit, Jesus Rodriguez, recalled being hauled in there three times for being a communist activist.

"The worst thing was when they took you to the interrogation room and you saw your companions coming out with their faces all disfigured from the beatings and a totally shocked look on their face," he said.

"They interrogated me three times, hitting me on various parts of my body, threatening me with a gun and making all kinds of insults."

He considers himself relatively lucky, however, he said — his beatings were nothing worse than "normal" by the standards of that police headquarters.

Spain has signed an anti-torture convention as well as an extradition treaty with Argentina, but the Spanish government has not indicated whether it would support extradition of the suspects, which must be decided by a judge.

Among the suspects was a name that Maria, Felise and Jesus remembered well: Juan Antonio Gonzalez Pachecho, known as Billy the Kid.

Now 66, he was a fresh-faced young man in the 1970s when the plaintiffs accuse him of torturing them.

"Billy the Kid is a name that still instils a lot of fear. He was really famous because he tortured half of Madrid," said Rumin.

"They called him that because he used to do tricks with his pistol, as if he were a cowboy," added Echegoyen. "And because he was very young."

Victims complain that the Spanish state has never officially acknowledged state atrocities of the Franco era. The lawsuit in Argentina, they say, may be the last chance to get justice.

"I hope that after this case, no one in Spain will be able to say that it never happened," said Rodriguez.

"I want it to be written down in a court ruling that eliminates any historical denial of this," he added.

"This is one of our last chances to achieve that — not only because the torturers are older but because we are too. Today there is a generation of victims that is still able to talk. In 10 years not even half of us will still be here."

ARGENTINA
One dead, one missing as Spanish fishing boat sinks near Argentina
Url copied to clipboard!