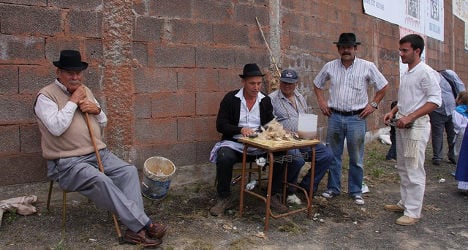 Life moves at a different pace in the Atlantic archipelago and the line "one hour less in the Canaries" plays up the stereotype. Photo: El coleccionista de instantes/Flickr

Anyone who's tuned in to the news on TV or on the radio in Spain when the clock strikes the hour is likely to be familiar with the line "One hour less in the Canaries".

The Canary archipelago, which is approximately 2,000 kilometres southwest  from the capital Madrid, is in the same time zone as London or Dublin, commonly known as Greenwich Mean Time.

But a recent proposal by Spain's Rationalization of Timetables Association (Arhoe) has led the Spanish government to debate whether the clocks should be put back an hour to increase productivity and sleeping hours.

The news has alarmed Paulino Rivero, President of the Canary Government, who on Friday wrote in his blog that the islands would "lose their constant mention" in Spain’s media if the clocks stood the same as on the mainland.

"How much is it worth in advertising terms to be mentioned every hour in mainland Spain’s media?" Rivero argued in his blog.

"How much would we lose if no reference was made to the Canaries any longer?"

The Spanish Parliament is currently evaluating the socioeconomic benefits of going back to Greenwich Mean Time, as Spain only put the clocks forward sixty years ago when dictator Francisco Franco decided to be in the same time zone as Hitler’s Germany.

As for the Canaries, the decision to be in the same time zone as London was made by King Alfonso XIII in 1922.

The Spanish monarch responded to pressure from Britain, who had a large commercial trade network in the Canary Islands at the time.

The archipelago, just off the coast of Morocco should in fact be one hour behind Greenwich Mean Time because of its more westerly positioning in the Atlantic Ocean.