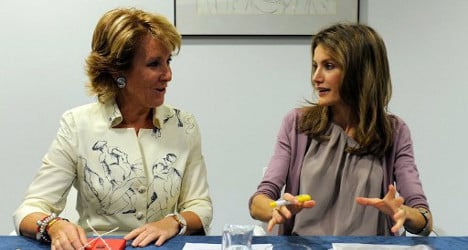 Spain "needs to be 'Catalanized' and to get to know and love Catalonia and the Catalan language," said the President of Spain's conservative Popular Party for Madrid on Thursday.

In a speech at a private club in Barcelona titled 'My vision for Catalonia', Aguirre pleaded for Catalonia to take the lead in Spain when it came to science, business and culture.

The ex-President of the Community of Madrid also argued it was a mistake to try and kill off the region's independence movement by appealing to economic motives.

Instead, a rapprochement  was needed between the battling politicians of Madrid and Barcelona.

"When we are prisoners of love and hate, economic consequences matter little," said the highly influential politician to a packed house.

Click here to read The Local's profile of Esperanza Aguirre, one of Spain's great survivors.

Aguirre also plumped for an overview of Spain's autonomous region with its 17 "mini-states" — a situation she said detracted from Catalonia's special circumstances.

It was "understandable that Catalan politicians feel uncomfortable" when they saw other communities "created out of nothing equal Catalonia in terms of powers and institutions," she said.

"I'm not scandalized by the fact that Catalonia wants to be independent but this has to be done legally," said Aguirre.

"The law prohibits secession, but the law doesn't prohibit changing the law. If Catalonia wants succession, it should be done through the legal channels."

But Aguirre's speech wasn't without its criticisms of the region which has ambitions to become independent.

She blamed the rise of nationalism in Catalonia on the region's leftist parties, and said independence activists had "indoctrinated Catalan children" while neglecting to focus on the strong links between Spain and Catalonia.

The politician also argued the Catalan media had failed to question nationalist thinking.

"History is much more complicated than the nationalist would have you think," she said.

Almost half of all Catalans, or 49 percent, are in favour of independence for the region while just over a third, or 36 percent are against, according to a poll ran by centre-left daily El Pais earlier this month.

A huge protest on Catalonia's National Day on September 11th National Day saw hundreds of thousands of people link hands across hundreds of kilometres in support of independence for the region.

Aguirre was President of Madrid from 2001 to 2012 and a minister in the conservative government of José María Aznar.