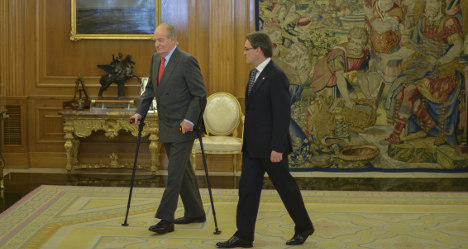 The health of Spain's monarch was the subject of much debate in Friday, the Spanish edition of the Huffington Post reported.

Early in the day, the palace had scheduled a news conference for 6pm to give details on the status of the King's health.

In the intervening period, the country's El Confidencial reported the King would soon be travelling to the United States for specialist advice regarding pain in his left hip.

That story was also reported by Catalonia's La Vanguardia newspaper while the news site Vox Populi said the King would have surgery in the US, but not for an operation on his hip.

Alongside the media speculation, Twitter messages flew about hinting at a possible abdication of the Spanish Head of State.

"There's a rumour that the Royal Family will announce the abdication of King Juan Carlos at 6pm. If it's true we will have to thank him for his great service to Spain," tweeted Juan Gomez.

"The abdication of the King is at 4pm so that three quarters of all Spaniards will be having a siesta and he will be able to do it quietly and without incidents," wrote Twitter user Miguel Jimeéez.

But sources within the Royal Family have denied the King will step down, according to Spain's Huffington Post.

"All talk of an abdication is completely off the table," the online news site quotes those sources as saying.

Spain's King has undergone 13 operations since the 1980s, and the monarch had both hips replaced in three operations last year.

Sympathy for his injury was overshadowed by popular anger that he made the trip while Spaniards were suffering in a recession.

The king had a benign tumour removed from a lung in May 2010. In 2011 he was given an artificial right knee and had a torn Achilles tendon repaired.

His most recent operation was in March when he underwent back surgery to treat a slipped disc.

Despite his operations and opinion polls showing his popularity plunged last year, the king insisted in a televised interview in January that he had "energy and hope" to continue ruling.