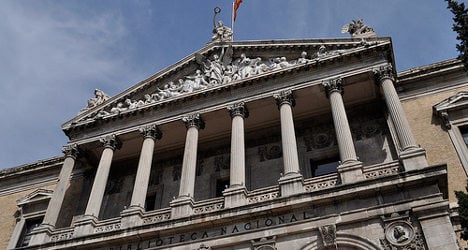 The Spanish National Library where the fragment of the opera by Vincenzo Bellini was found in an album of 19th century photographs and drawings. Photo: Katie Bordner

The single page of manuscript shows an outline of seven bars of notes from a duet in the opera "Il Pirata" (The Pirate) which had its debut in Milan's La Scala on October 27, 1827, the National Library of Spain said.

The manuscript by Bellini (1801-1835) has annotations at the bottom of the page and a phrase written in the right-hand margin: "Manuscript of Vincenzo Bellini and his brothers Mario and Carmelo".

The phrase was a form of authentication commonly found on manuscripts sought after by 19th century collectors of "relics" of the most memorable composers, the library said in a statement. The newly discovered Bellini manuscript was unusual because the notes did not correspond exactly to the final score, although there were barely any changes, it said.

"This rarity makes it of even more interest from a musicological point of view," the library said.

The fragment was discovered after the library's catalogue service requested the identification of a "sheet of music bound in an album of 19th century photographs and drawings with landscapes of Malta and Sicily", it said.

Born in Catania, Sicily, Bellini is said to have composed his first pieces at six years old. He wrote sacred and chamber music but his greatest popular successes came with operas such as "Il Pirata", "La Straniera" (1828) and his most famous work "Norma" (1831).