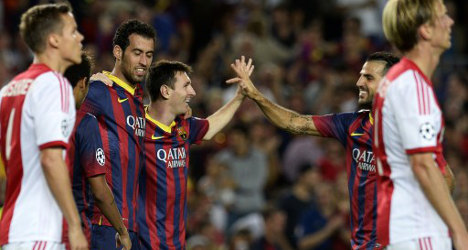 Messi celebrates with his teammates after scoring a brilliant freekick against Dutch side Ajax. Photo: Lluis Gene/AFP

The four-time World Player of the Year now has 62 Champions League goals to his name as Barca cruised to victory in the first ever competitive meeting between the two sides.

Messi opened the scoring on 22 minutes with a sensational free-kick and made the game safe 10 minutes after half-time with a typically cool left-footed finish.

Gerard Pique added a third when he headed Neymar's cross past the stranded Kenneth Vermeer before Messi rounded off the scoring 15 minutes from time.

"In the first-half we found it a bit difficult because they played well, but in the second we moved the ball much better and controlled the game," Messi told Canal Plus.

"In general I think we played a very good game. The more variety we have the better. There are games where we need to manage the ball, control the game, and others which are more difficult where we will need to do a bit more."

Messi also took time to lend his support to coach Gerardo Martino, who will fly back to Argentina after the game to attend his father's funeral.

"It was a special game. It is a shame what has happened and he is suffering, but we are all with him in this moment."

Martino thanked the team for their support and was happier with the balance Barca showed in contrast to their nerve-wracking 3-2 win over Sevilla at the weekend.

"This victory allows me to relax. Away from my personal situation, it is very important for the club and the team to gain confidence and start the group stage with a win at home," he said.

"Thanks to having more of the ball we were more stable and we pressurised them better," he said.

"I think we will find the variation we need, we are still just at the beginning of the season."

After a decent opening spell from the visitors, their good work was undone when Lerin Duarte unnecessarily dived in on Messi on the edge of the area and the Argentine picked himself up to fire the resulting free-kick in off the inside of the post.

Victor Valdes was then forced into two smart saves from Ricardo Van Rhijn and Duarte to send the hosts in ahead at half-time.

However, Barca could also have extended their advantage before the interval as Messi uncharacteristically lacked precision in his finish when faced with just Vermeer to beat in first-half stoppage time, the goalkeeper making a comfortable save.

It was only a matter of time before the Ajax goal was breached again, and unsurprisingly it was Messi as he received Sergio Busquets's pass, cut inside and slotted past the helpless Vermeer.

The Argentine nearly had his hat-trick in bizarre circumstances seconds later as he prodded the ball towards goal with his knee from Neymar's cross, only for it to dribble inches wide.

Barca were in cruise control by this stage and they did eventually get their third of the evening when Vermeer got nowhere near Neymar's in-swinging cross and Pique had the simple task of heading into an unguarded net.

Messi then sealed his hat-trick with another unerring finish that arrowed into Vermeer's bottom left-hand corner from the edge of the area.

And the visitors were even denied a consolation when Valdes saved Kolbeinn Sigthorsson's penalty 13 minutes from time after Javier Mascherano had upended Thurani Serero.