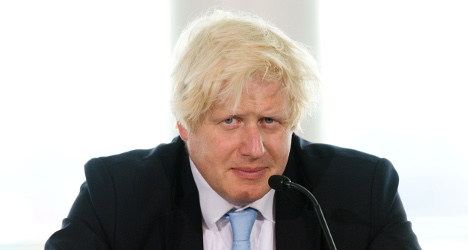 But "I was going along the canal the other day on my bike, and I came across a family from Spain," the London mayor told the business networking group.

"The guy was from Malaga. He was in construction. He had absolutely lost hope of finding anything.

"I felt it was a real tragedy," the mayor was reporting as saying in the UK's Telegraph newspaper.

"The guy could barely speak English. You wouldn't have had that ten years ago before the euro began," Johnson went on.

"They have every right to come and seek work but it brought home the disaster of the euro."

"The euro project has been a catastrophe for Europe," said the mayor.

In the same speech, Johnson said he couldn't understand why English schools taught French and not Spanish.

Boris Johnson has been the conservative Tory Mayor of London since 2008.

He has a habit of making headlines for his colourful turns of expression.

Recently the mayor wrote in the UK Daily Mail that he hoped it was just a coincidence that Britain was sending a fleet of warships to Gibraltar during the current spat between the UK and Spain.

"I hope that one way or another we will shortly prise Spanish hands off the throat of our colony," he commented in the UK daily.