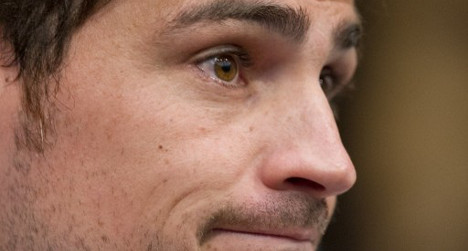 The 32-year-old was injured only thirteen minutes into the game when clashing with teammate Sergio Ramos and was substituted soon after.

Real confirmed the injury in a statement on their website, with the player expected to be sidelined for "three or four days" according to manager Carlo Ancelotti.

Casillas was making his first appearance for Los Blancos in a competitive game since January after first breaking a bone in his hand and then losing his place in the side to Diego Lopez.

Real ran out 6-1 winners over Galatasaray, Cristiano Ronaldo celebrating the signing of his new contract with his 23rd career hat-trick.