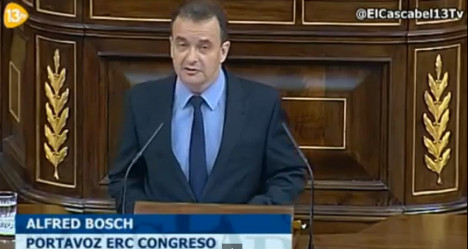 Bosh lashed out by asking "Why does this law apply to pupils in the Balearics but not to the Members of Parliament?". Photo: YouTube

Alfred Bosch took centre stage at Spain's Congress of Deputies when he chose to speak of a new linguistic decree introduced in the Balearics, even though parliamentary talks were on corruption and democratic regeneration.

"While we're on the subject of corruption, the ruling Popular Party has imposed, without any form of dialogue, a deceitful language decree using the trilingualism hook to crush the schooling system and the Catalan language," Bosh told the Spanish Parliament.

Speaker of the House Celia Villalobos warned the ERC deputy he was going on a tangent but Bosch then decided to continue his speech in English.

"The Kingdom of Spain has some problems with freedom," he began.

Villalobos interrupted Bosch to remind him that even though "he had a very good accent" he wasn't there to be tested on his English.

But the Catalan academic lashed out by asking "Why does this law apply to pupils in the Balearics but not to the Members of Parliament?"

Bosch, who was asked to step down from the stand, was referring to a new trilingual education model (Spanish, Catalan and English) which teachers in the Balearics argue only serves to undermine the role of Catalan in the classroom rather than improve students' English skills.

More than 2,000 people gathered outside Majorca’s Parliament on Monday to demand the new TIL law be withdrawn and that islands' Education ministers step down from their posts.