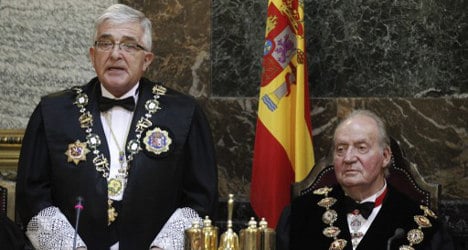 Spain's King Juan Carlos was jeered by public servants on his arrival at Spain's Supreme Court on Monday.

Due to preside over the opening of the court's 2013/14 judicial year, the King was subjected to boos and whistles from angry members of Spanish unions including the large UGT and CCOO general unions.

Also coming in for special attention from the protesters were the President of the Community of Madrid Ignacio González and Madrid Mayor Ana Botella.

Dozens of protesters chanted slogans including "More workers rights, less official cars" and "Justice for the rich, justice for the PP (Popular Party)".

There were also calls for Justice Minister Alberto Ruiz-Gallardón to resign.

"Today we are here to mark a sad day for justice," said Hernández, saying that Spain was heading towards a privatized justice system .

He cited a range of changes to the legal system including a 2012 law that imposes new administrative charges for various judicial processes including appealing decisions and taking a case to the Supreme Court.

Spain's royal family stated in July they are not "concerned" about being booed by the Spanish public. Sources said, however, that the treatment "bothered" them and showed a lack of respect.

A poll published in centre-left newspaper El Pais in April showed 53 percent disapproved of the way the 75-year-old Spanish head of state is carrying out his functions, while 42 percent approved.

This was the first time the monarch had received a negative rating.

Don't want to miss a story about Spain? – Then join The Local Spain on Facebook and Twitter.