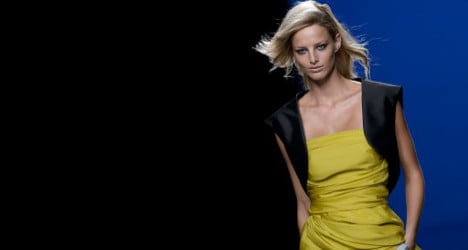 Madrid’s Fashion Week came to a close on Tuesday after five days of the latest trends in global haute couture gracing the Spanish capital’s catwalks.

The prestigious event featured upcoming Spanish designers like Moises Nieto and Juana Martín as well as three Peruvian fashionistas who were invited to showcase their work in a European setting.

But those who were less concerned about the fashion and more interested in the example being set by the long-legged models were quick to query the show’s organizer on their body weight policy.

Click here to see more photos of the models at Madrid Fashion Week.

Pérez Pita pointed out that Madrid’s Fashion Week was a “pioneer” in ensuring that models “had realistic and healthy body shapes similar to regular women”.

The fashion show organizer said the weight increase of the models wasn’t appreciated as much by outsiders because of the “tremendous” height of some of its participants.

Spain's stance against underweight models in its top-level fashion shows was called into question recently after a catwalk organized by Brand Spain in Brussels featured a woman who was so skinny even the public voiced their discontent.